Wow, when I one dark and cold winter day sat down to crochet, I would never have guessed how popular that little skull would be, even now several years later.

Over the years I've got many requests for the pattern after I removed it from the blog (I had my reasons) but I gladly shared it to those who asked for it!

Today Im feeling very generous, so I will post the pattern once again!

It's only pictures since I don't know a single f*king word in this magical language that exist in the crochet world. I leave that up to you! Comment and help each other out and I'm sure you will create beautiful angry skulls!

Good luck and thank you all so much for reading my weird little blog :) 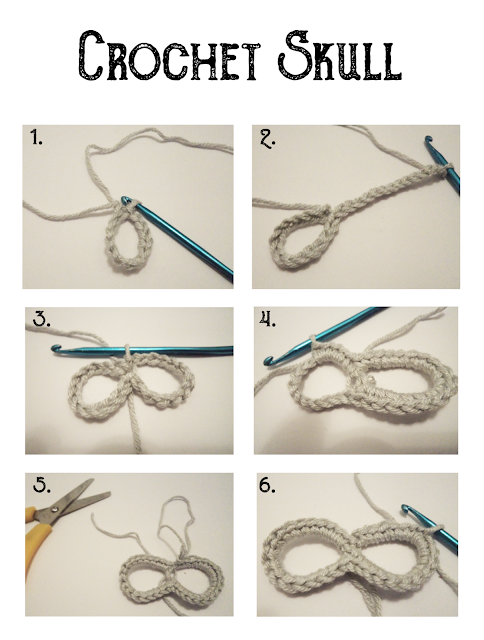 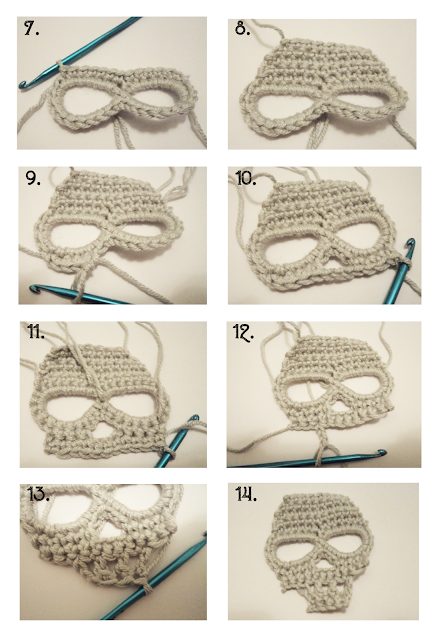 My last night in colombia was spent at a newly built "farm" called Rancho Relaxo owned by one Australian and 5 Canadians. They very recently started this place and will official open for tourists next month. So me and a English girl got a preview before any one else! For now it's a big house with dorm rooms and a outside kitchen. They have their own small waterfall with pool you can swim in. We (inviga) by skinny dipping in the night after a few cocktails. They have two dogs and heaps of chickens, a garden with herbs and vegetables, a mango tree and their very own masseuse which we also tried! It's a perfect place to relax or party if that's what you want, rom, vodka, cranberry gin, whiskey even something called snakebite... Beware of that one;) the guys who owns it is awesome and very relaxed! Defiantly one of the best days and worst hangovers here in Colombia!

3 nights were spent in Taganga, a small fishing village and party place for backpackers. The beachfront is full of small open air bars and the rest is old school grit roads with a lot of diving schools along them. Diving and snorkeling is suppose to be good I wouldn't know since I mostly spent my days at a reggae cafe drinking the best Colombian coffee ever!

A week on a remote beach, white sand, crystal clear water, no Internet, only electricity at night powered by generators, living in a tiny hut with palm leafs as a roof, eating freshly caught fish, drinking coco water, listening to live Latin music, dozing off in the gaze of the sun and falling asleep to the waves thundering next to you. That's Playa Blanca in Colombia and where I spent my last week.

I got there by bus/ferry/motorbike. I was very lucky to run into a Colombian artist named Dickson with a motorbike willing to take me all the way to playa blanca. Sitting there on the bike roaming trough the scruffy roads, barely able to see because of the rain, it suddenly hit me, if the bike crashes I'm fucked, I'm dead. But it was all good, steady as a rock Dickson took me around the island showing me his artwork in fancy resorts and helping me out to find a place to stay and bargain for me, such a nice guy!

The days were spent on the beach snoozing in the sun and cooling off in the sea. The evenings I went to various bar shacks eating and drinking local specialties and hanging out with any people that would be around. It was a mix of one-night-tourists , local Colombians and Latin American season workers. Practicing my Spanish and jamming with the latin musicians.

Life was easy, even tho the toilets is only a wobbly stinky seat with no regular flush, and cold showers from a bucket- This IS paradise and a paradise very easy to get lost in.

A week in Rio de Janeiro is almost over and my final stop will be Colombia. It's been a week with perfect beach weather and a lot of wild parties. I have a few stories but they are all way to crazy to tell you here on the blog..

And even tho I have had time to do all these touristic stuff, you know see the statue of Christ, the viewpoint called sugar loaf and favela tour and so on... I just couldn't be bothered, the beach and the parties have been way more appealing than pretending to enjoy the city in a group of tourists. I do however have pictures of it from distance, hahaha! Enjoy!

The park and the tower

the weather is good so the most of the time I spend in the park chilling with the geese, black swans or skating. The evenings is spent in "botecos" some sort of brazilian diner with snacks and beer with friends.
And the other day I went up to one of the viewpoints here in São Paulo. 37th floor and 360 view of this massive city!

so I arrived in Brazil and São Paulo. After a 18 hour buss ride cross the border from Argentina.

First I met up with a friend (Marcelo) of mine that I met 3 years ago in Australia. He has been showing me the city often referred as "the concrete jungle" witch is a perfect name. A city of concrete and graffiti.

We've been long boarding every day so far and I love it! And the other day we met up with Alberto, another friend I know from Australia. It's great having friends around to show you all the cool places in this big big city.

you on the flip side!
- Xx Yella